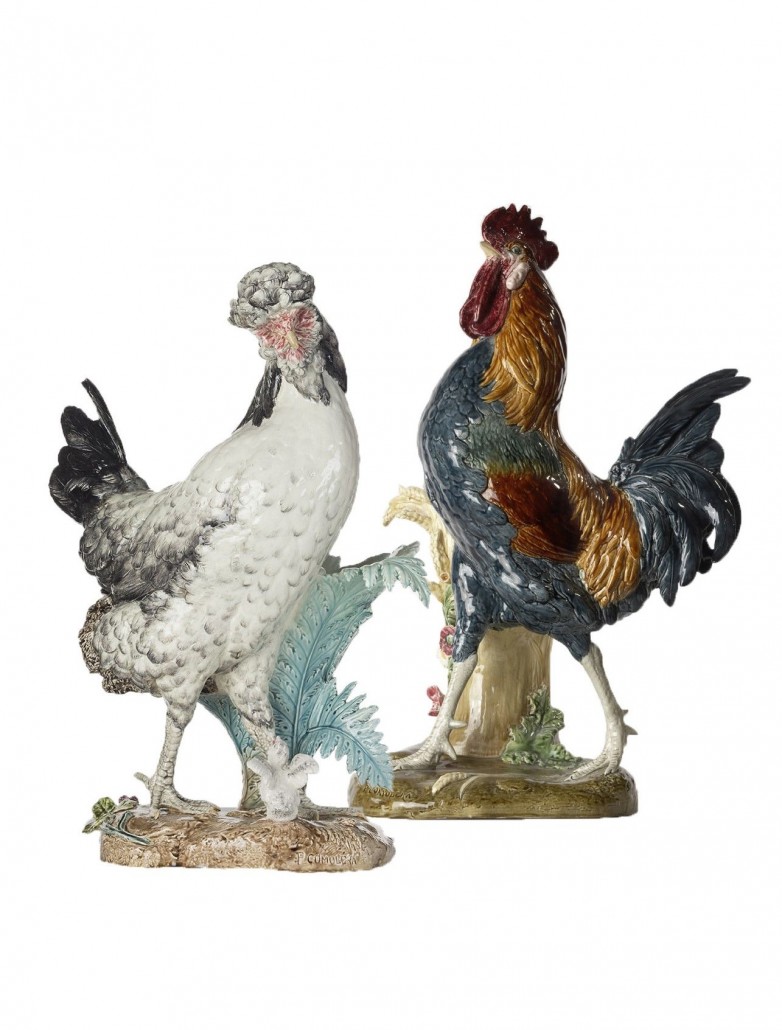 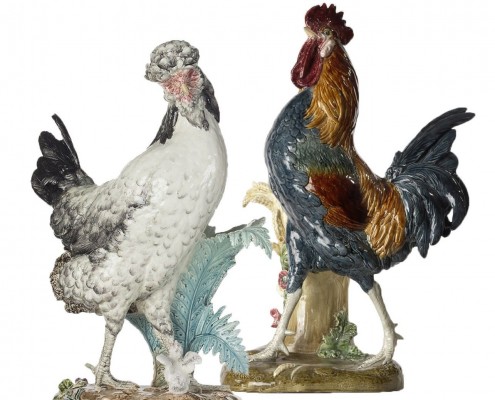 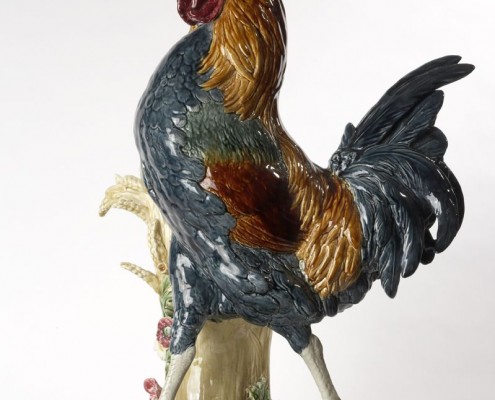 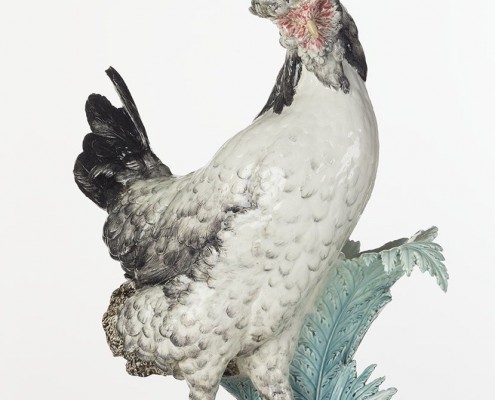 A Rooster and a Hen of Bress, signed: P. Comoléra

This remarkable ensemble comes from the prestigious Choisy-le-Roi factory which, under the Second Empire, became an essential center for the diffusion of artistic ceramics, rivaling the famous Minton and Sarreguemines factories.

Larger than life, it fascinates by its subject: a simple couple of animals, in a treatment with naturalist realism which is fully in the spirit of its time, and which contrasts with the ancient and virtuous subjects, now outdated time. A hen and her chick Bresse form the counterpart of a cock no less splendid. The subjects are entered in the action.

The rooster is humanized by the sculptor. It looks proud and proud. Standing on its feet, the animal inflates the torso and tail (like the ridge), which are adorned with a brilliant plumage in deep colors of blue, brown, red and celadon.

The crested hen is more maternal. Also in the attitude of walking, she looks at her chick flapping to hold his attention. He is hungry and lets it know! Besides, the mother holds in her beak a worm which is promised to her. The hues are this time clearer. The mostly white plumage corresponds to a green vase of water and a lighter mound than that of the rooster leaning on a vase of ocher wheat ears and standing on a green mound.

The animals are striking realism, even in the modeling of the plumage, which appears light, soft and flexible, while the material used is quite the opposite. This is one of the great successes of the famous animal sculptor Paul Comoléra for the manufacture of Choisy-le-Roi.

The manufacture of Choisy-le-Roi

Hippolyte Boulenger took the direction of the manufactory of Choisy in 1863. It causes the rise of the factory and embarks on the realization of large majolica. This change allows the Manufacture to participate successfully in the various World Expositions.

The factory attracts several renowned ceramists like Ernest Chaplet (1835-1909) and Albert Dammouse (1848-1926) who work in close collaboration with Louis-Robert Carrier-Belleuse (1848-1913), artistic director of the manufactory until 1890 Several European artists participate in the creation of the plays including the French Paul Comoléra.

Artistic ceramics from the Choisy-le-Roi factory compete with Minton’s pieces. While some are inspired by Bernard Palissy’s “rustic figulines”, others are more relevant to sculpture. Choisy is famous for its large animal-inspired slip pieces covered with bright and colorful glazes.

The manufacture enjoys several awards at the World Expositions. At the 1878 exhibition in Paris, she received the gold medal.

It is the French sculptor Paul Comoléra (1818-1897) who supplies the vast majority of the mussels of the pottery of Choisy-le-Roi. He creates a bestiary realistic, decorative and brilliant.

Comoléra is trained by François Rude (author of one of the four reliefs of the Arc de Triomphe de l’Etoile) which encourages him to approach a realistic and romantic approach to sculpture. He exhibited at the Salon in 1847 and quickly became one of the most important animal sculptors of the nineteenth century.

The Exposition de Lyon is, in a way, the culmination of these dreams in slip, of which a protractor makes an inventory at La Prévert:

“Cock proudly erect on its spurs, swan spying a frog recklessly perched on top of a rush, parrot bristling its feathers and sketching a grimace at the sight of a beetle that grows on a reed, scornful crane and lost eye in a reverie, etc. […] All these attempts at subtle and comprehensive art, so perfectly successful, are of a very frank color under the enamel that takes light well and does not appear glassy. The success of the objects exhibited by the H. Boulenger pottery is capable, undoubtedly, of determining a trend and a great movement of the new art of decoration and ornamentation. ”

Shelf with lacquer decor
Scroll to top
By continuing your browsing on this site, you agree to the Cookies policy designed to optimize your user experience, generate navigation statistics, and facilitate the sharing of information on social networks. OKPrivacy policy