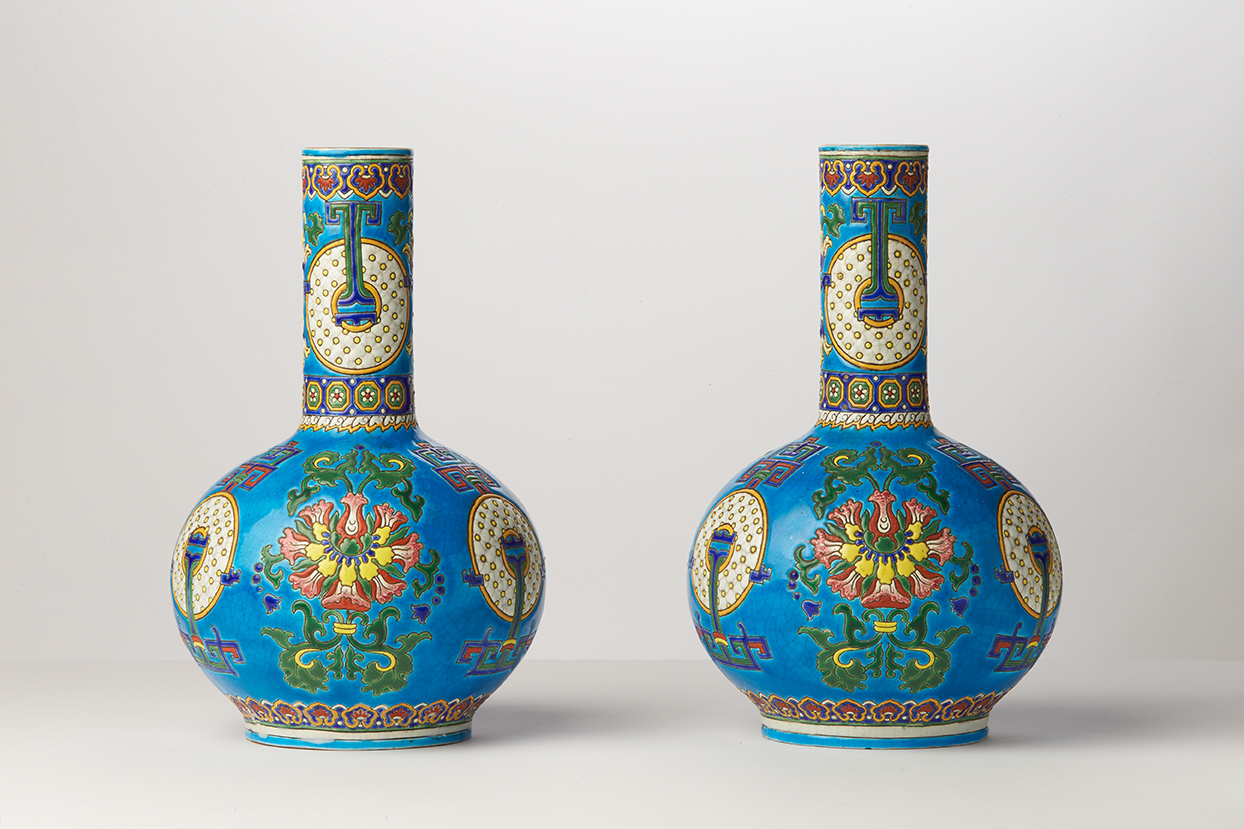 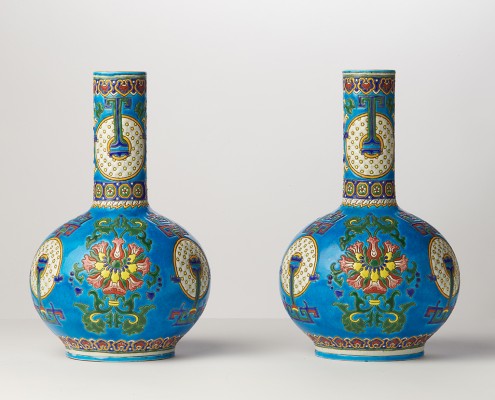 This superb pair of tianquiping earthenware vases from the second half of the 19th century most certainly comes from the Jules Vieillard factory in Bordeaux. The very rounded body of the tianqiuping and the long, narrow neck are characteristic of the shape of Chinese vases called “tianquiping” or “celestial sphere”. These vases with a deep blue background receive an Asian-inspired decoration with a white medallion whose central motif is also circular in shape. This theme is also present on the neck of the vase. On the vase body, there is also a very stylized geometric floral motif in the style of mandalas. This one is built by flowers unfolding from another plant motif. The whole is surrounded by green foliage and some dark blue additions. The base of the vase as well as the beginning of the neck and the lips are decorated with an ornamental frieze with vegetal patterns. The use of the Asian repertoire testifies to the attraction of 19th century artists to Far Eastern art.

In 1845, Jules Vieillard succeeded David Johnston at the head of the faience factory. His role and that of his sons as directors of the factory until its closure in 1895 were decisive. Vieillard wanted to compete both with the biggest earthenware factories like Sarreguemines and Minton, but also with the smallest Parisian workshops. Thus, he created a specific artistic department whose production is mainly inspired by Persian, Chinese and Japanese motifs and forms. In terms of technique, from 1875, his sons adopted the cloisonné on glazed earthenware perfected by Eugène-Victor Collinot. In the same years, this technique also made the Longwy factory, owned by the Huart brothers, very famous.

Vieillard participated in various exhibitions and won a prize at the 1878 Universal Exhibition in Paris. In 1878, the quality and richness of his exhibition were particularly appreciated by art critics.

Rattan Rocking-Chairs and Bench
Scroll to top
By continuing your browsing on this site, you agree to the Cookies policy designed to optimize your user experience, generate navigation statistics, and facilitate the sharing of information on social networks. OKPrivacy policy