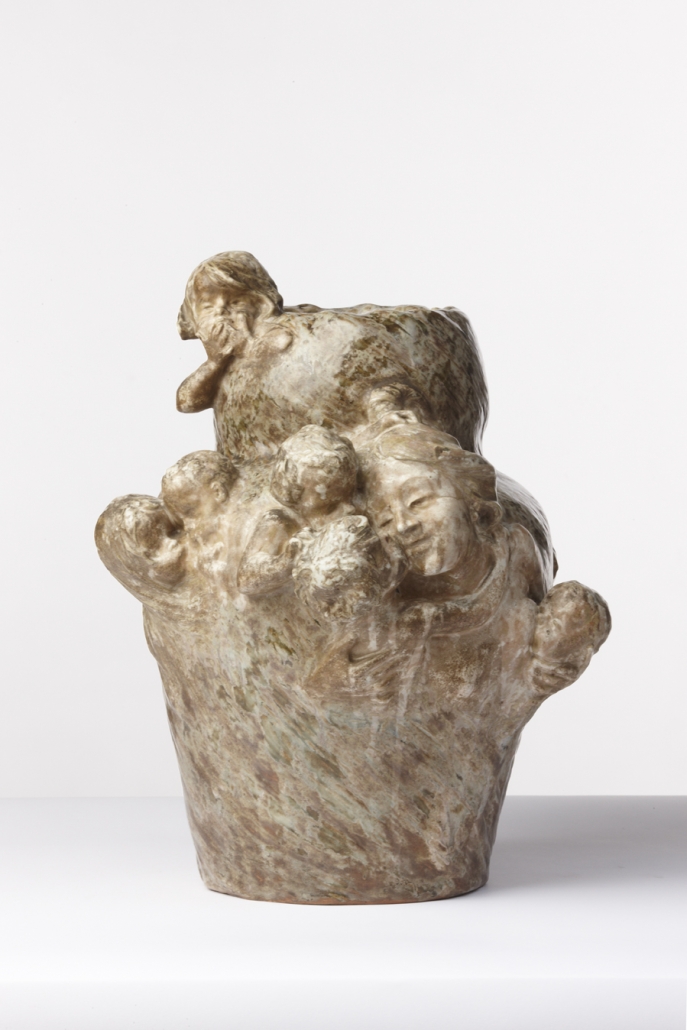 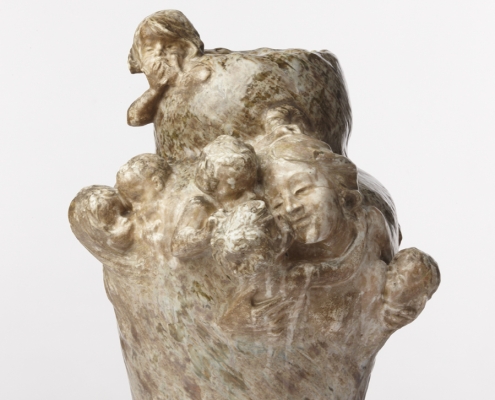 Abolish the boundary between fine and decorative arts, between sculpture and ceramics, between what is beautiful and thought-provoking, and what is useful and requires craftsmanship. This is the goal that artists, claiming to be Art Nouveau, set out to achieve at the turn of the 20th century. Without a doubt, this vase is a perfect example. Made in the Mougin brothers’ Parisian workshop, it is the work of the sculptor Jules Aimé Grosjean. In this perfect union of the useful, the beautiful and the intellectual, Mougin and Grosjean give birth to a work that is neither that of a ceramist nor that of a sculptor. This total work arouses contemplation as much by its subject, that of the ages of life which intermingle over the whole body, as by its material and surface effects.
The theme treated by Jules Grosjean is hardly new and has its origins in Greek and then Roman antiquity. Over the centuries and interpretations, the number of ages varies: three, four, six, seven, ten or twelve. This division of life into great periods crosses the centuries.
Titian, with the Allegory of Time governed by prudence, gives a renewed interpretation of this division, showing only the faces, and superimposing them on the maws of animals.
Three ages are also represented by Grosjean. Only the latter overturns the codes. The number three, associated with the Holy Trinity, the three continents, the Holy Family or the Magi, loses its religious symbolism here and takes on a more metaphysical meaning.
Instead of depicting a young man, a middle-aged man and an old man, Grosjean’s composition is free of all historicism and is largely influenced by the symbolist movement. Grosjean owes this latter influence in large part to his master Ernest Barrias.

Service to the “horns of plenty” – KERAMIS, Boch brothers,...
Scroll to top
By continuing your browsing on this site, you agree to the Cookies policy designed to optimize your user experience, generate navigation statistics, and facilitate the sharing of information on social networks. OKPrivacy policy